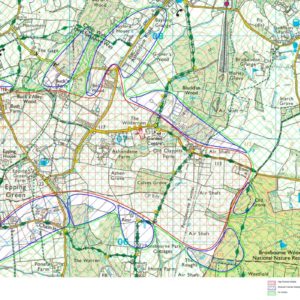 A development comprising the demolition of an annexe, stables, storage and garage buildings and the construction of a new house with associated landscaping on land at Tudor Manor Farm. The application site lay within the Metropolitan Green Belt as defined in the East Hertfordshire Local Plan.

Our Visual Impact Assessment was commissioned for an Appeal, with Full Planning having previously been refused as deemed inappropriate development in the Green Belt with harm identified to its openness and to the character and appearance of the area.

Our Report concluded that the visual impact of the proposed dwelling on the Green Belt would not be significant, which was consistent with the Planning Inspectors view, and also that our proposed mitigation planting to the front boundary would reduce the visual impact to the openness of the Green Belt. It was also agreed that our assessment of the impact on the wider landscape as minimal was correct. However overall partly due to the height of the proposed building and its effect on the openness of the Green Belt the development was refused.